Comic Review: Over the Garden Wall #2

Despite never having watched the TV series it comes from, I loved the first issue of Over the Garden Wall. It felt like such a weird and inventive comic, and don't hold the All-Ages audience against it. Without knowing the TV series, it's a bit hard to follow the jumps in time that it takes, but it makes up for that with continuing how fun and off the wall it is throughout. 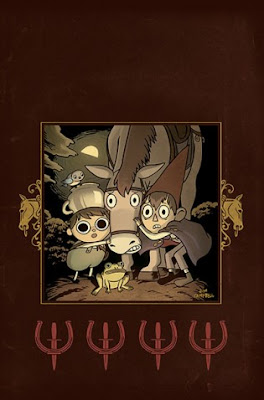 This series, and this issue in particular, is very difficult to explain in a review. The main reason is that it is mostly about comedy, and comedy is notoriously hard to review. Comedy works because the jokes are funny, and it's difficult to get that across without repeating the jokes, which would either ruin them for you, or not come across as funny when I try to explain it.

Greg and Wirt mostly are in the backseat in his issue as we focus on the story of Honest Fred the horse. According to his story, he was notorious for being overly honest at all times, causing him all sorts of misadventures. It's light on horse jokes or puns, which is fine but mildly disappointing, instead telling a story that is not so specific to him being a horse. Like the last issue, this is committed to going just a bit further than you expect, making things crazy and over the top, but in just a slightly different direction. When you think they're running out of places to go with the story, they find somewhere else to take it, and always keep this bit of doubt in your mind about Honest Fred and if he is really as honest as he claims to be.

There is also a bit of a time skip, to a later point in the TV series that this is based on. Between that and the sidelining of Greg and Wirt, it's a little strange jumping into this comic without knowing the TV series. That made it a bit confusing to start with, and overall drags down the issue a bit. From my perspective, it basically is a short story connected to the last issue, though your experience with it would likely be different if you've seen the TV series.

I didn't like this issue quite as much as the last, but it's still pretty solid. The weird adventures of a very honest (or deeply dishonest) horse is not what I expected to find in here, but it surprised me in all the right ways.
Posted by Zac at 12:00 PM