TV Review: Gotham Season 2, Episode 1 "Damned If You Do"

Last season, I watched every episode of Gotham. I didn't quite watch it as it aired, especially after the first couple episodes, and I finished a few weeks after the season ended, but I mostly kept up with the show. It was okay, trying to do a lot of things and only sometimes succeeding, with a lot of elements that seemed ill-advised or problematic. Probably the worst thing I can say is that I don't remember a lot of the first season, which is never a good sign.

Still, I was cautiously optimistic and watched "Damned If You Do", the first episode of this season, and I still have no idea if my optimism was misplaced. I wouldn't call it good, but I wouldn't call it bad either. At the very least, they appear to be trying to go in a different direction.

The best way to look at the episode is probably through the lens of what they left hanging in the air at the end of Season 1. Specifically, there are five major plot threads that were left not entirely resolved that they came back to this season.

Ed Nygma killing Miss Kringle's boyfriend: Cory Michael Smith needs a ton of credit for this. He has never been given good writing as Ed, but has fought about as hard as an actor can to get it to work. In this episode, he is given only a single scene, most of which has him talking to another personality of his in the mirror, which is acting a lot like Jim Carrey. I don't yet know quite why they're going down this road at the moment, other than he has to become the Riddler eventually, but the actor sells it so much that I almost like how it works.

Barbara's fall into insanity: They finally found something interesting for Barbara to do. Now that she's in Arkham, her scenes with Jerome are actually quite fun to watch. It's one of the few areas of this episode that felt like a different show from the rest (which is a marked improvement on the first season), but it worked well enough I was disappointed to see them broken out of Arkham at the end. I'm still not a huge fan of having Jerome be a major part, or the potential Joker, but at least it's something they're doing well. 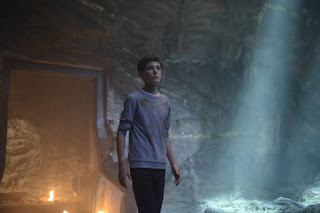 Bruce and Alfred discovering the hidden staircase: I am really torn on this. On the bad side, I have no idea where this storyline is going, but it doesn't appear to be anywhere good. It's possible to make Thomas Wayne being some sort of proto-vigilante work, but it feels like a completely unnecessary addition to the story that seems to be there to make Bruce relevant in the present time - and he doesn't need to be. While I feel like the plotline is headed for disaster, it's quite a lot of fun seeing Bruce and Alfred interact, with particular credit to the sequence in which they make the bomb and set it off. It's fun while it's around, but I don't entirely know if it's needed or will go anywhere good. 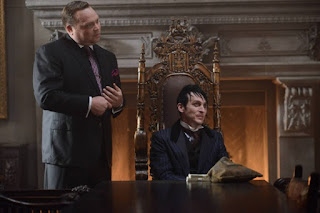 Penguin taking over the Gotham underworld: During long stretches of last season, Robin Lord Taylor was pretty much the only redeeming quality of this show, and he continues to be the strongest thing in the show. He makes almost everything effortless, or at least seem that way. He settles right into place as the top of the world (at least for now), and has just an incredible amount of power and influence there. Special credit to him and Zsasz for the scene in Loeb's house, in which they use a decapitated head as a ventriloquist dummy as part of a great intimidation scheme. Nothing about that scene went quite the way I expected it to, and whether or not you would argue for if it was good or not, it was pure gold all the way. 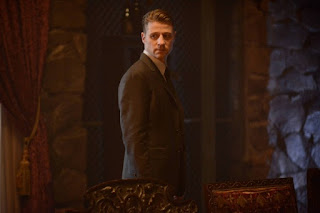 Jim's tension with Commissioner Loeb: Here is where I keep running into a problem with the series, and why it has never quite figured out how to work. While Jim is the main character, and we know that he is the good cop in a sea of corruption later on, the show doesn't seem to want to commit to much more than that. Sometimes he is trying to work within the rules of the corrupt system in order to get somewhere, while other times he's desperately trying to work against it and finds the idea of using corrupt means for a good end to be completely morally repellent. He's had no consistency, and it'll be the next episode before we know for sure if they've decided on a direction for him, or if they're just going to continue waffling on it. This episode takes him deep down the path of a dirty cop, and outside of one exchange with Bruce, it's almost lost that he is doing all of these things with good intentions. It's not clear if they're going to start handling him more consistently, but going down this dark of a path with him right now will require long, subtle development to get to the point that it feels like deliberate character development and not just jerking him around to fit the requirements of the plot, so they're certainly going for the more difficult option here.

Miscellaneous Notes:
I'm going to keep watching this show, partially out of hope and partially because I have become too easy of a sell on comic-based TV shows. I don't expect it to get better, only hope, and I will check in on it as the season goes on - not every episode, but when I find something interesting enough to talk about.
Posted by Zac at 12:00 PM