This was originally posted as a review for Word of the Nerd. Reposted here with slight modifications.
I've never been a Transformers fan, mostly because I was born about 10 years too late for it to be a large part of my early life. In fact, all I've seen are the Michael Bay movies, but those are another discussion for another time. I do know a lot of it by osmosis, and with the launch of a new ongoing series based on a cartoon series, this issue of Transformers: Robots in Disguise (not to be confused with the previous series of the same name) felt like a place I could jump in and just have some fun with the series.


A lot of the feeling of this series makes sense knowing that it is based on a cartoon. For one, it is definitely aimed at an "all ages" audience, which is a quality we don't see often in comics anymore. For as much as I can put myself in the mind of a kid, it seems like something that they would enjoy. It's accessible and easy to understand, without insulting the intelligence of the reader. There wasn't quite the depth to it that I would like in an all ages book, but there was enough that I felt like it was capable of deeper stories and more depth. 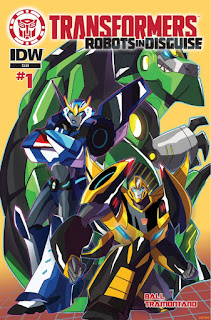 Fitting with its cartoon background, the plotlines and characters are simple in their execution right now. There are a few too many names being thrown at you all at once, but that's all that's being crammed in at the moment. Most first issues try to cram too much in and you just end up lost trying to keep everything straight. This is holding off on going deep into the characters, something that will likely be fleshed out later on. The designs are also very simple, allowing everyone to be very distinct and make it more clear who is doing what, assuming that you can keep up with all the names.

The one part of its cartoon background that rubs me the wrong way is the involvement of a couple of human characters. It's not that human characters shouldn't be part of Transformers, they just don't feel like they are that well used. There is a young boy who somehow knows more about the Decepticons than Bumblebee and his team, and while it's clear that he's meant as somewhat of an audience avatar, it feels like that's all he is in the story. The boy's father is also in there, but his purpose is even more unclear in the story. I can forgive those slights for now, but it's not clear exactly why these characters are there in the story.

What this makes me think of most is Avengers Academy, a Marvel series from a few years back that focused on a team of young, superpowered characters that barely could work as a team. In this one, the leader role is Bumblebee, who feels rejected from his peers and almost exiled to work with this group of Transformers, and while it's a common dynamic, a lot of the lighter tone early in that series is present here, so it's looking like a good sign that this comic is following in that vein.
Overall, I liked this first issue. I'm not a Transformers fan, but there are still things to enjoy in here. It's not a high priority to read the next issue, but I'll probably check that out when it comes out, and that's really what a first issue needs to be.