This was originally posted as a review for Word of the Nerd. Reposted here with slight modifications.
This is an odd comic series that I'm really not sure what to think about. When I read and reviewed the first issue of the series on my own site, I was in the same spot, but three issues later, I'm still not sure what to think about it. When I first picked up Valhalla Mad, I recognized the writer and artist from Catalyst Comix, a series that I loved despite barely knowing what it was half the time. I'm still trying to work out what I think about this series, but for some reason, I'm compelled to keep reading. 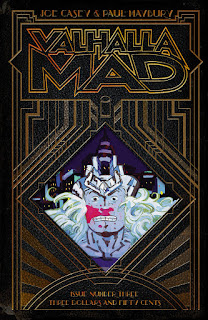 One thing is that these issues are very slow. Not a lot happens with the plot, but the characters sure love to talk. Knox, Greghorn, and Jhago never use one word when they could use five, and they all talk in fake-y old English, which can be difficult and slow to read. The dialogue is giving character development, but not nearly as much as you would expect given how much of it is there. For one storyline, we have Greghorn dealing with Knox's betrayal from the previous issue, when they found out who Arthur really was. He is also dealing with the fact that a lot of time had passed since the last time he was on Earth, and that's mostly what we get out of him.

Meanwhile, Knox goes off to confront Arthur/Akumo, even though Jhago has left to get Greghorn and he's not supposed to go after him until all three of them are together. This doesn't go forward at all in the way that I expected, there's nothing near a resolution, and the confrontation has barely begun, but I find myself intrigued nonetheless by what's going on.

I really just don't know what to think about this series. I keep reading it, even though I can point out more annoying things than I can outstanding things, but it keeps drawing me in. These creators collaborated in Catalyst Comix, and their part of the story (Amazing Grace) started off slow and boring but became my favorite part, so there's always room for improvement, and they have a proven track record with me. So, even though I'm not really sure why, I'm going to keep reading.