Before reading this comic, I'd never looked at the Action Lab logo. I'd seen it (having reviewed a few of their comics), but I never really noticed it. Now I see that it is a dog superhero, and that dog is a lab. Yes, that is Action Lab: Dog of Wonder. They made a comic entirely out of that one bad pun.

These are my kind of people.

I have two complaints about this comic. The first is that there are human characters. The problem isn't their presence, but that they are flat characters. Even by the standards of this type of story, the human characters drag things down. They have no motivation or even the fun of one-dimensional villainy. I understand that they're necessary, but they could at least be fun as villains. 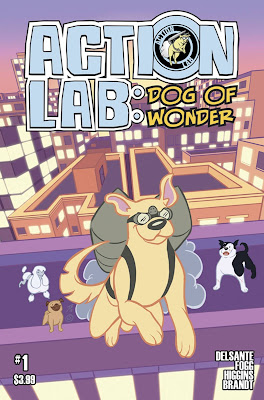 It's frustrating because this comic loves having fun. It's the logical place to go, being a dog superhero that started as a pun. Of course, that's not where it stops. The weird continues when the poodle owned by the animal control guy is kidnapped by Action Lab, who suspects she's secretly a spy. I haven't even mentioned how the poodle was kidnapped, which is my favorite element of crazy. It involves two dogs in a trenchcoat, and is exactly what you're picturing right now.

Of course, this isn't just fun because of the writing. It comes from the wonderfully bright world, requiring credit to the often overlooked job of colorist. The brightness really pops, feeling like a cartoon in the best way possible. It's probably a bit too much, but that's exactly what it needs to be.

Can you tell I liked Action Lab? The comic, not the company. Actually, I like both. The company is great, and so is this comic. It even ends without a cliffhanger, which you may know is a pet peeve of mine. It's like they wrote this comic especially for me. Which leads to my one other complaint, why it's not the perfect comic for me.