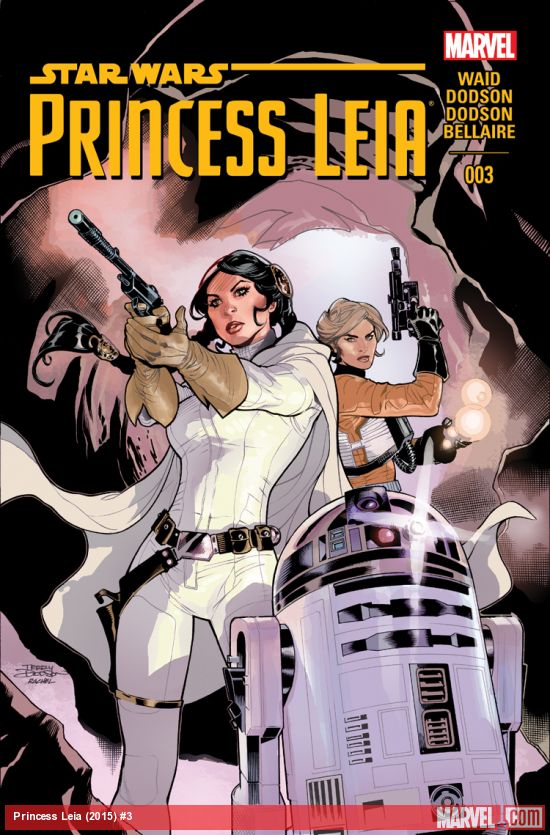 This series seems to exist because of one unanswered question from the original trilogy: How does Leia deal with seeing her home planet be destroyed? It's given no time in the movies, to the point that redubbing her dialogue to make it any random planet would not have changed anything. This series has decided it is going to charge right into dealing with that loose thread, having Leia travelling to find survivors of Alderaan, trying to keep what she can of her world alive.


At the end of the last issue, we were shown that one of the refugees, Tace, is unintentionally betraying them, telling her sister where they are and what they are doing without knowing that she is under the control of the Empire. I expected that to be a priority in this issue, but it is barely addressed - they find out there is a traitor, and Leia sets finding the traitor as a priority at the very end, but otherwise it is left alone. Instead, the story takes a bit of a diversion, with them having found more survivors but running into the Empire, rather than what it felt like they were setting up with a traitor in their midst.

Both this and the Darth Vader series have shown that the comics are more interesting when digging into side characters, which comes mostly out of necessity. This series is happening before the current ongoing Star Wars series, so Leia has to be in a particular place by the end of this series. To make up for that, Evaan carries the story forward in the character development area. I did not notice at first, as some of her actions seemed inconsistent, but looking closer, they are a result of conflicting loyalties. She is one of few Alderaan survivors, and she puts that above almost everything else. At the start of the series, she hates Leia for not showing more emotion over it, but also defends her because she is their princess, and traditions need to be preserved in her eyes. This gives her a lot going on internally, and that's helping her almost stealthily steal the show.

There are only two issues left in the series, and what surprises me most is I don't know what it's going. I can guess, in the broad strokes, such as Leia being the character we see in the Star Wars ongoing, but the way that we get there is something I can't quite predict. For that reason, and having done a good job of telling the story so far, I am in on seeing this series through to the end.
Posted by Zac at 4:00 PM