For this arc, it looks like we're going to have Angel and Faith without Angel. At the end of the last issue, which did not have Faith, Angel left for the Buffy series for a story arc over there. Despite that change, this issue is pretty strong as the beginning to an arc, and I'm looking forward to where they take the rest of the arc.

If you have a suspicion of what's happening in an arc called "Those Who Can't Teach, Teach Gym", you're probably right. By the end of this issue, we see Faith has infiltrated a prep school as the gym teacher to investigate vampire activity. While it's best left alone how she gets in that position, there's a lot I like about this premise. For one, it feels like an unused idea for an episode of the Angel TV series, so it's right at home in tone. It also inverts some ideas from the early seasons of Buffy: here we have the adults investigating the sinister and supernatural goings on involving the students. 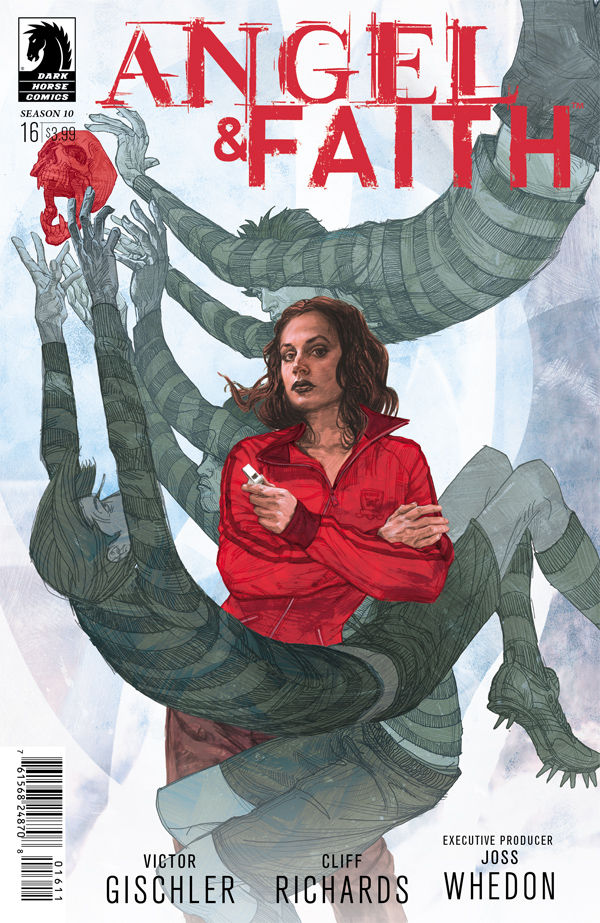 I would normally have problems with the pacing of this issue. The title of the arc hints at Faith infiltrating the school as a teacher, but that only happens a few pages from the end. When an obvious part of the premise of an arc doesn't happen until the end of an issue, it feels like the rest of the issue was dragged out just to make it a concluding twist. This feels different. Before we get to that ending, we have Faith trying to move into her new apartment, but Brandt drags her into the investigation with Angel gone. As Faith and Fred investigate, they end up in the middle of a vampire attack involving some of the students, which leads Brandt to suggest that Faith get involved more directly. At the same time, we're seeing the students' perspective, setting up the conflict as they see it. Instead of just marking time, this progresses directly toward that end, needing all of the steps in the middle to get the characters to that point.

At first, this issue felt a little insubstantial. After thinking about it, that's exactly what I like about it. Just a couple issues ago, we were dealing with Illyria's return, and the Buffy series has a very large conflict, so going back to the small, just fighting a small nest of vampires, feels like a nice change of pace. It might get bigger, or it might stay smaller. I don't know, but I want to see where it's going next.
Posted by Zac at 12:00 PM