Just after the Leia series ends, Lando gets his turn as lead in a comic series. It is very definitely set before we first meet him in Empire, though it's not entirely clear when exactly it is set. It also is definitely a #1 issue, with some weak spots that are common in #1 issues. Still, it has enough promise in it could continue the new Star Wars comics habit of being consistently pretty good.

As expected from his life as a smuggler and a thief, there are specific cliches that are hit pretty hard. Lando starts this off owning a very large debt, and is giving one single job that would allow him to pay off that debt. While it feels a little tired from that perspective, those cliches serve as a framework for the rest of the story, not a constant throughout. 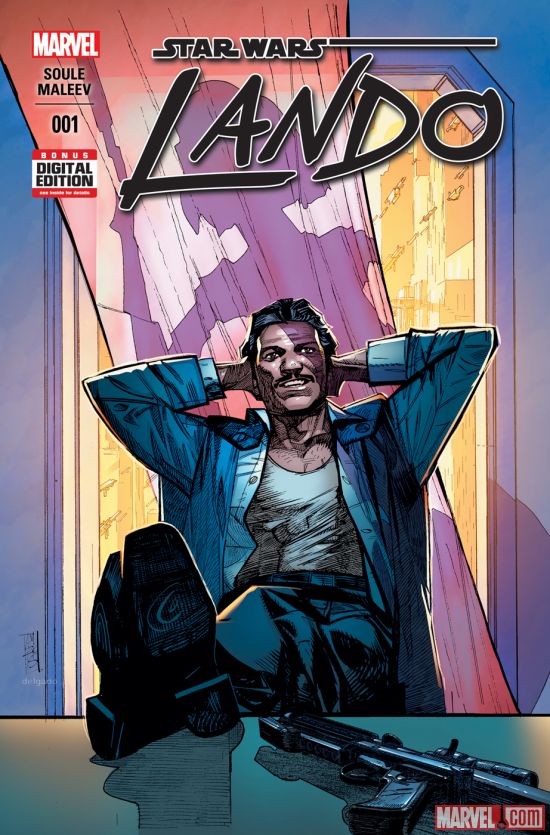 This issue does suffer from the last page twist, in that everything seems to move a little slowly in order to get a big reveal at the end of the issue, trying to hook the reader for the next one. I have to give it credit for having more ambition than those usually do, seeming to want to throw everything it has into that reveal and what it does to the story, but it still slows down the story to make sure that happens at the end.

Unlike most of the Star Wars books, I'm finding the supporting cast here a little iffy. They are usually the most interesting part of the books, since the main characters are mostly locked in to how they have to act, while there is a lot more freedom with the side characters. There are a couple of characters they call the twins, who are hired as muscle, that are used and then almost discarded, leaving me confused since a lot of effort was used to set them up, just to be left in limbo at the end. There's also Lobot, Lando's partner, who seems likely to improve as it goes on. Specifically, he has computers implanted into his brain, designed as battlefield computers to calculate probabilities in battle, which he uses a lot for their jobs, but he's not very well used here. It seems like he's there to make a "Never tell me the odds" joke, but even that falls a bit flat right here.

For all my problems, I still liked this first issue, for one simple reason: Lando is made of charisma. He feels like he just walked off the screen and into the comic, which has been a particular strength of the Star Wars books we've gotten out of Marvel so far. This could easily be slotted into the backstory of the movie, and he feels like the same exact character that he was there. For all its flaws, I'm interested in the next one because he has all the charisma and swagger that he did in the movies, and that's enough to make me want to see what the next one is. I'm not overly excited, but I'm definitely interested.
Posted by Zac at 12:00 PM